Dalls Porpoise: Feared to be endangered?

Feared to be endangered?

Dalls Porpoise is a species of a porpoise. It is named after William H. Dall, a zoologist who was the first to identify it. Dall’s Porpoise belongs to the family of Phocoenidae. Sometimes the fishermen and even scientist confused them with dolphins (though they may deny it!). They think that either word can be used to mean exact same mammals but it is not and they shouldn’t be called interchangeably. Dalls Porpoise are smaller than of Dolphins. What’s more difference between them is the beak. The Dolphins usually have beaks and more noticeable dorsal fins whereas with Dalls Porpoise, they don’t have beaks.

Dalls Porpoise feed on small fishes and they usually go to open seas where they can find many. They are usually found in North Pacific Ocean from Japan to Southern California and as far north as Bering Sea. This beautiful mammal lived for about 16-17 years. No one knows yet (even the scientist) on how they die. But mostly this mammal died because of by-catch in fishing nets. And sometimes, people are really aimed to hunt for them. No worries, IWC or International Whaling Comission are already doing something about this matter.

The series of pictures below are some evident of poor killings of this mammal.

should hunting be stopped?The usual cause of death

Dalls Porpoise can been seen in some near coastal areas and some people can see them because whenever a boat comes by, a Dalls Porpoise will catch its wave and do a little “roaster tail”. But you can also see them in some conservation places where they allow dolphin watching along with this mammal.

There are many oceanarium and aquatic resorts nowadays that are featuring this friendly mammal and these places are also considered to be the conservation place of Dalls Porpoise as they took very good care of the sea creature.

Dall’s porpoise is a type of sea mammal that belongs to the Phoceonidea family. They commonly thrive in the warm waters of the Pacific Ocean but are mostly concentrated in the Sea of Okhotsk. They are also present in other regions such as in the Sea of Japan as well as in the Beijing Sea.

Dall’s porpoises are known for their active behavior. They commonly hunt is small groups and are seen eating small fishes such as anchovies, mackerel, and herring among many others.

Dall’s porpoise has a unique body feature that distinguishes it from other cetacean species. It has a thick body with a small head. An adult can grow 230 centimeters and weight as much as 200 kilograms.

Another distinct feature of Dall’s porpoise is their dorsal fin. It is commonly set just at the back with a light gray or white color patch.

It is somewhat similar to that of an Orca. It features a dark grey to black body with white patches.

It was named after a famed American naturalist William Healey Dall. This cetacean caught the attention of millions during the 70s as dozens of these creatures are killed due to salmon fish trawls.

The unique body shape of the Dall’s Porpoise makes it easily distinguishable from other cetacean species. The animal has a very thick body and a small head. The colouration is rather like that of an Orca— the main body of the porpoise is very dark grey to black with very demarcated white patches on the flank that begin some way behind the flippers, which are small and close to the head.

The dorsal fin is set just back from the middle of the back and sits up erect. The upper part of the dorsal fin has a white to light grey “frosting”. The fluke has a similar frosting. The adult fluke curves back towards the body of the animal, which is another distinguishing feature. It is larger than other porpoises, growing up to 230 cm in length and weighing between 130 and 200 kg. Dall’s Porpoises live for up to 15 years.

Two consistent and well-defined colour morphs— the dalli-type morph and the truei-type morph have been identified. The dalli-type is more widespread, ranging across the north Pacific Ocean from northern Baja California in Mexico to southern Japan (including the Sea of Japan in the south up to the Bering Sea in the north). The truei type is more restricted, occupying a smaller area of the northwest Pacific north and east of Japan. The species differs from other porpoises in that it prefers deep water and the open ocean. It may come closer to land. If it does, it typically stays close to deep-water canyons. The population is believed to be common in most of its range and although no precise estimates exist (surveying is hampered by the porpoises’ propensity for approaching boats), the global population numbers in at least the hundreds of thousands. (See also ‘conservation’ below). The greatest concentration is perhaps in the Sea of Okhotsk.

Dall’s Porpoises are hugely active creatures. They will often zigzag around at great speed on or just below the surface of the water creating a spray called a “rooster tail”. They may appear and disappear quite suddenly. The fastest of all small cetaceans, Dall’s Porpoises can swim at up to 55 km/h, almost as fast as the Orca. The porpoises will approach boats and will bow- and stern-ride, but may lose interest, unless the boat is travelling quickly. 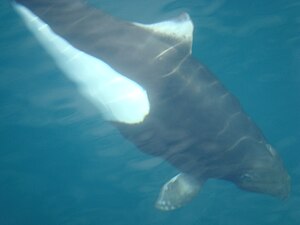 Dall’s Porpoises appear in small groups (about 2– 10 in number). The groups appear not to be tight knit and may aggregate together at good feeding grounds. On very rare occasions a thousand or more individuals may be seen at the same time. They feed on a variety of fish and cephalopods. Shoals of fish such as herring, anchovies and mackerel are common meals.